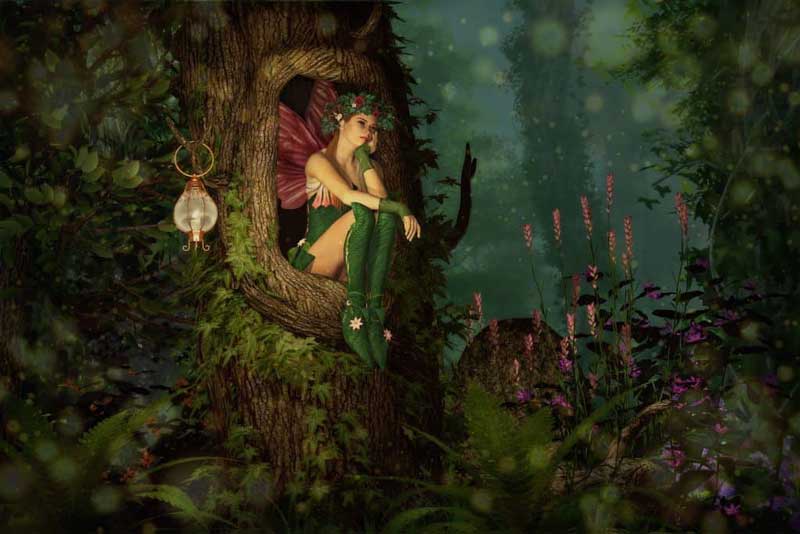 We always hear about the fairy courts and dances, their works in the fields and forest and their adventures to faraway lands. However, do we ever wonder where do fairies go after a long day of work and magic?

This week, we are honored to be welcomed by several fairies into their place of rest and relaxation. We will be exploring their marvelous, magical homes that are cleverly hidden in plain sight, using their cloak of magic and the help of nature to hide. This is a true honor, so remember to thank our fairy hosts!

When still ways away from their homes, fairies make use of what they have on hand. Water fairies are known to make cushions out of bubbles, creating a silent world at their choosing. Normally, they’ll be hidden beside river rocks!

Tinker fairies, on the other hand, are known for their famous sturdy green leaf hammocks. When taking a break, Tinker fairies weave large leaves over each other to create a sturdy hammock which they string up with roots and branches.

It’s so sturdy that even gnomes could lie on it! Hunt for the Green Leaf Hammock at the Fairy Garden.

The Old Fairy House is home to the Elder Fairy and her sisters. With a chimney lined by vines and flowering plants, the earth magic of the Elder Fairy is strongly tied to the house, protecting her wards and loved ones.

The Old Fairy House is frequented by young fairies interested in learning the ways of the earth and forests. Individual classes are held by the Elder Fairy and her apprentice at the attic of the house and they say that sparks fly out of the chimney at night lit by their magic! Don’t forget to announce your presence if you ever visit the Old Fairy House at the Fairy Garden.

Not all fairies live above ground, some fairies, like the Bunny Fairy prefer to live with her familiars and favorites, the rabbits. The Underground Fairy Burrow is one of the most secure and hardest to find fairy homes because of its nature. One must answer a special puzzle to even know where it’s located.

Lit by a combination of sun magic and waterfall tears, the Underground Fairy Burrow is warm and spacey, perfect for hibernating bunnies and Bunny fairies who would like to get some quality rest. Get this at the Fairy Garden.

It serves as a base for Flower Fairies for their journeys with butterflies and bees to pollinate the fields. With its petal-soft walls and calming magic, the Tulip Fairy House cares for every creature that walks through its doors. It lifts their spirits and sends them with positive magic for their journey. Visit the Tulip Fair House at the Fairy Garden.

Ivy and Blues Fairies own the Ivy Marble Fairy House. It’s one of the oldest fairy houses in Fairyland, protected by magic that allows it to change locations in an instant. The ivy vines wounding on its roof acts as a signal that tells the fairies when it’s going to rain or when the sun is at its highest, allowing them to do their duties attending to blooms dutifully.

Rough and dingy it may seem, The Shingled Fairy House contains one of the biggest libraries in Fairy Land. Home to the Book and Ink Fairies, the Shingle Fairy House have weathered storms and tornadoes for centuries all the while preserving the fairies’ long and winding history.

Take a peek into the history and culture of fairies in The Shingled Fairy House at the the Fairy Garden.

Enjoy the warmed of the Sunflower Fairy House and visit the Flower Fairies in the Fairy Garden.

Of course, fairies of all kinds and duties do gather to share stories and merriments after work. They do this at the River Fairy Gather House, situated at the bank of the clearest rivers of the land. Fairies from the forests fly in to listen to the lessons of the Elder Fairy, and Mountain Fairies ride leaves down their waterfalls to gather sunlight from the Sunflower Fairies.

The River Fairy Gather House is where you meet all types and kinds of fairies! Visit it at the Fairy Garden.

Follow my blog with Bloglovin
PrevPreviousTen Fairy Costumes To Don On This Halloween
NextFairy Garden Ponds, Rivers, and StreamsNext