This week’s Enchanted Eight leads us to the wide expanse of fields beyond the fairy towns and gnome villages. Now, tread carefully and quietly for we are about to witness one of the oldest and wisest creatures in the world. With their galloping hooves, smooth and shining coat, and spiraling singular horns, unicorns inspire awe with their grace and wisdom.

This week, let’s get to know the elusive unicorn herd visiting these fields. They’re visiting for the fresh crisp air and magic poultices prepared by their trusted fairies this season. Remember, tread carefully and respectfully. 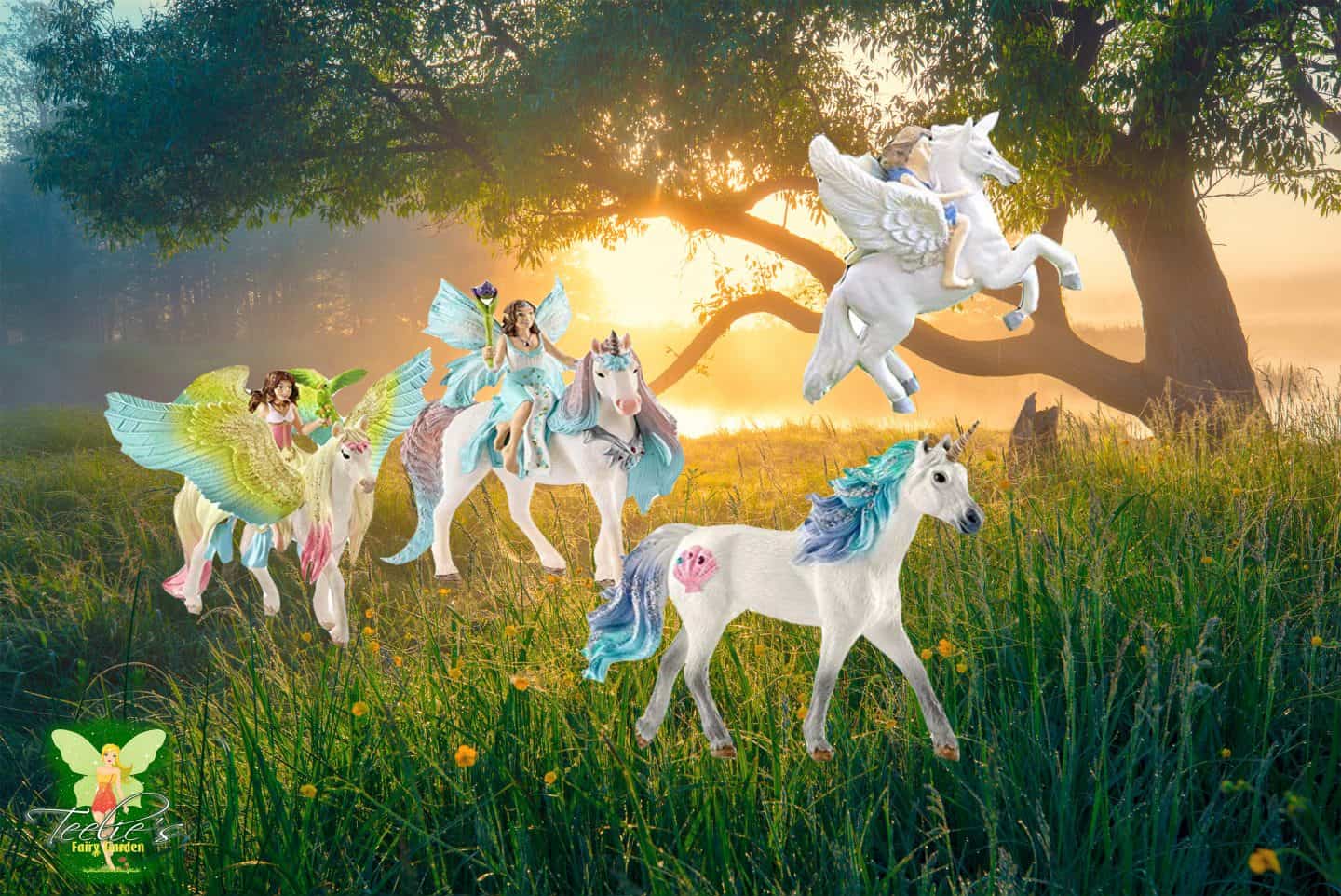 4. The Unicorn of the East Sea

After making an alliance with fairies hundreds of years ago, some unicorns began to accompany their favored fairies to their duties. The Spring Unicorn is one of them. With its green and blue wings, and flower-colored hair, she lifts and carries fairies around to sprinkle magic over budding flowers across fields.

Flowers emerge after her every step and the river reeds bow to kiss her hooves, a true creature of magic. Meet her and her favored fairy in the Fairy Garden.

Part of the royal family of their herd, the Royal Unicorn Princess looks every bit of a princess with her braided tail and silver necklace, wrought from the iron mined by dwarves and gnomes from the faraway West. She, too, has a favored fairy and she accompanies her when going around the kingdom.

The Royal Unicorn Princess’ powers lie in healing, from her horn springs powder blue flowers that can be made into poultices and potions that heal everything from broken bones to broken hearts. She is beloved by all her subjects across the land. Meet her and her favored fairy in the Fairy Garden.

He is one of the few unicorns that have a completely white coat, from his mane down to his hooves. He has the swiftest hooves across the land and is trusted to carry news from kingdom to kingdom. Meet him and his favored fairy in the Fairy Garden.

4. The Unicorn of the East Sea

With mane made of sea foam and crashing waves, the Unicorn of the East Sea controls his domain with benevolence and kindness known to many. He saves drowning creatures and makes his home by the shore, guarding anyone who passes by.

His magical pink seashell serves as a beacon for every sea creature that needs his help. He is good friends with the Invisible Unicorn as he often visit the seas after his travels. Meet him in the Fairy Garden. 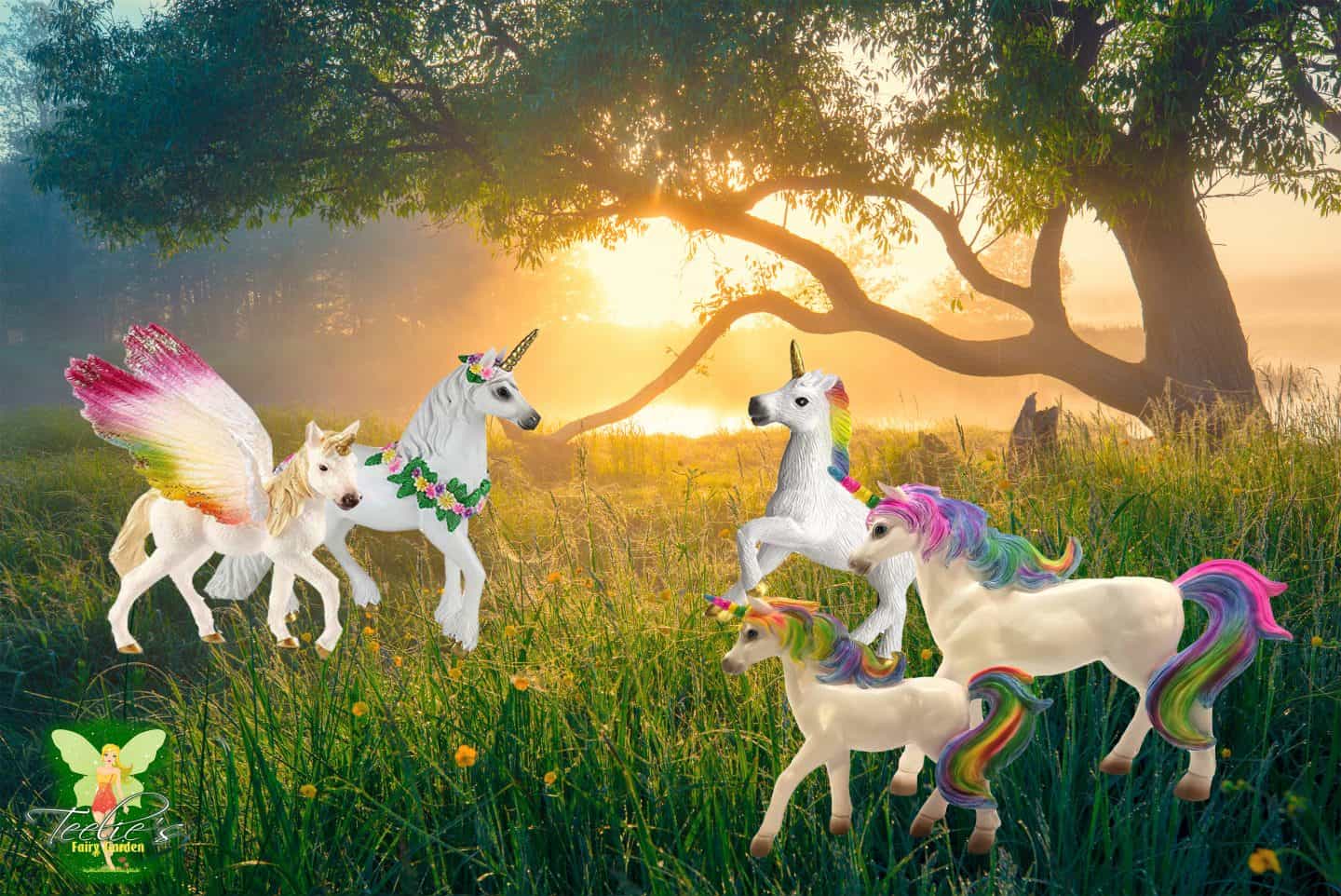 With wings of autumn colors, the Autumn Unicorn heralds the crisp air with every flap of her strong wings. She brings with her the aroma of ripe apples and pumpkins, with a nudge of her golden horn, everything ripens beautifully. Meet her in the Fairy Garden.

A close friend to the fairies, the Forest Unicorn is the guardian of all forests and lives in the Fairyland of Zen. She wears the necklace of flowers and leaves created by young fairies across her neck. She and the Spring Unicorn are great friends, often working side-by-side to make sure that the sleeping forest wakes up for spring each year.

In fall and winter, she guards all those who hibernate under her domain, ensuring their safety with the wards she casts using her golden horn. Meet her in the Fairy Garden.

The most playful and youngest of the bunch, the Golden-Hooved Unicorn is a close relative of the Rainbow Unicorn. He often plays near the fringes of the rainbows of the west, his mane taking on the colors of the rainbow.

He is a favorite among the younger fairies as he plays with them, his hooves leaving golden marks on leaves that eventually turn to golden brown, heralding Fall. Meet him in the Fairy Garden.

Residing at the end of all rainbows, the Rainbow Unicorns weave the colors of the rainbow into their wings, creating a striking myriad of colors many stare in awe. They walk proudly under the rain, patiently waiting for the sun to shine so they may spread color all over the land.

They walk the fields of the west and sometimes travel with the Spring Unicorn to lend their colors to make spring blooms more vivid. Meet them in the Fairy Garden.

Follow my blog with Bloglovin
PrevPreviousTake Part in the Magical Bounties of a Spooky Harvest Moon!
NextTen Fairy Costumes To Don On This HalloweenNext

Magical Aprons to Wear While Gardening

Fairy Land is filled with magical surprises and we want to offer you even more! Every Wednesday Teelie Turner will be giving away something magical, but you will never know what it is in advance.

Enter now for your chance to win something amazing in the Weekly Surprise Giveaways.

For USA Residents Only